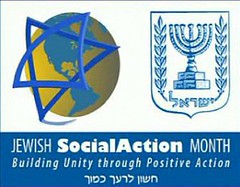 Jewish Social Action Month (JSAM) is an initiative of KolDor, a global network of young Jewish activists operating around the world, the Office of the Prime Minister of Israel and socialaction.com to promote both social action and Jewish Peoplehood.

In just three years since its launch, JSAM has evoked a remarkable response. Political support has come from the Presidents of both Israel and the United States of America, British parliamentarians, US senators and congressmen, Israeli Knesset members and others.

A wide spectrum of Jewish religious leaders, major institutions, youth groups, communal organizations and many others from around the world endorsed the initiative and created exciting and widespread programs.

JSAM 2008 takes place from October 30 to November 27, during the Hebrew month of Cheshvan, hundreds of activities are taking place right now in support of JSAM in Israel, USA, Europe and even Australia.

Find more videos like this on Jewish Social Action Month