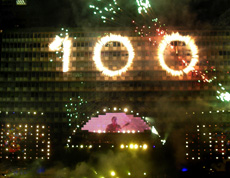 April 2009 will mark the 100th anniversary of the city of Tel Aviv. Tel-Aviv (The official full name is “Tel-Aviv Yafo”), which was a small neighborhood founded by 66 families on the shore of the Mediterranean Sea in 1909 is today the center of culture, economics and society in Israel. 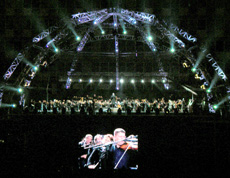 The Tel Aviv-Yafo Centennial Year opened officially on Saturday, April 4 with the biggest free concert in Israel history. Hundreds of thousands poured to Rabin Square, where the Centennial Celebrations commenced in a unique music and projections show.

The outdoor concert, which was undoubtedly the highlight of the opening week of the centennial events, was colorful and unforgettable. The performance made use of the entire square and the surrounding building’s facades to present a spectacle of lights and multimedia. The show focused on the city’s residents, conveying a message according to which everything is possible in Tel-Aviv Yafo. 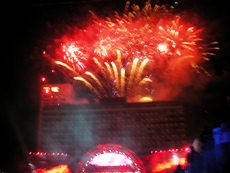 The Israel Philharmonic Orchestra, conducted by Zubin Mheta, opened the event and Mayor Ron Huldai lit a birthday cake with 100 candles. The orchestra was then joined by 800 dancers, singers, musicians and actors in homage to the history of the first Hebrew City.

The concert was marked by a breathtaking fireworks show and then followed by a big street party in Rabin Square and nearby streets. 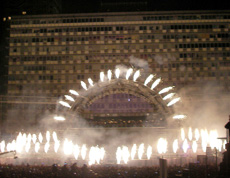 According to the Tel-Aviv Foundation, The Tel Aviv Centennial is meant both to underscore Tel Aviv’s status as an international city and to highlight its vitality and accomplishments.

The concert is only the first of many public events that the municipality of Tel-Aviv organized and will occur over the next nine months.